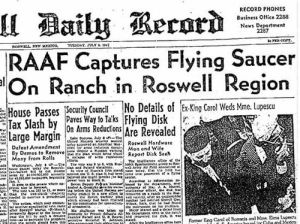 Yesterday we announced our line up of speakers (www.milwaukeeparacon.com/speakers) for the Milwaukee Paranormal Conference, including keynote speakers Linda S. Godfrey, Noah Leigh, and Donald Schmitt. The latter also made news yesterday by announcing that he will be unveiling what could be “the smoking gun” on the Roswell UFO crash of 1947: the Roswell Slides.

Schmitt and his research partner, Tom Carey, say they were given the slides by an undisclosed party. The origin of the slides is explained as thus:

“Some years ago, while an attic was being cleaned out, a chest was found containing many Kodachrome slides. Two Kodachrome slides were later found to have separately hidden in an envelope within the inner lining of the chest’s lid. The chest and it’s contents were traced and found to have belonged to an intriguing, childless couple [Bernerd and Hilda Blair Ray] that are now deceased.”

You can read more of the press release here: http://www.theufochronicles.com/2015/02/roswell-alien-slides-to-be-unveiled-in.html

Schmitt, Carey, and astronaut Dr. Edgar Mitchell will be presenting the slides in an event that will be livestreamed in Mexico City on May 5, 2015, just one month before the Milwaukee Paranormal Conference.

Are these slides going to be the incredible proof of extra-terrestrials the world has been waiting for? That is an answer I don’t have, but I’m very curious and excited to see what happens May 5 and then hear Donald Schmitt tell us about the case in person at his presentation here in Milwaukee. It will be a “slideshow” to remember!