We’re thrilled to give you a Halloween treat– the winners of the Cult of Weird/ Milwaukee Paranormal Conference short fiction contest. We absolutely thrilled that all of our story winners (and honorable mentions) have been narrated by the extremely talented Darren Marlar on his Weird Darkness program. Light some candles and listen here:

We had 40 entries in our contest, a lot of unique and chilling takes. The only contest requirements were a 1500 word limit, a paranormal theme, and Wisconsin as a backdrop. Our top three stories were separated by a mere one point margin. Here is our first place contest winner. 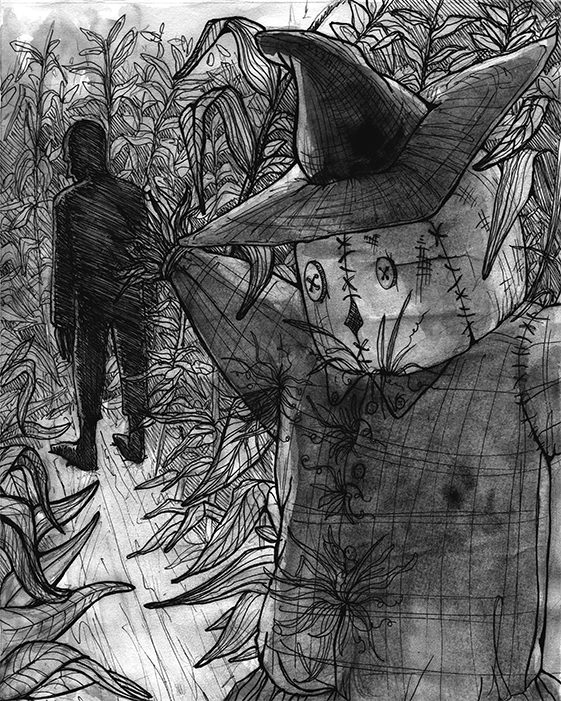 The Devil in the Cornfield

Forgive me for saying that the following events occurred when I was young, only fifteen in the autumn of ’64, living with my family a twenty-minute drive from Platteville.  I suppose it was October of that year when these things happened, as I sat alone on our front porch, waiting for my father to come in for the night.  The moon was low, casting an awkward, amber brightness upon the purple clouds, and the scarecrow that stands in the nearest cornfield was a dark, gaunt thing against the sky.

I noticed a bright light eclipsing the clouds and moon, swallowing up my vision.  As it cleared away, I saw a black car parked down by the barn, and a man, I thought, standing there next to the scarecrow, another shadow on the face of the horizon.  It certainly was an odd thing, for we expected no visitors, and seldom had passers-by.  Still, I wandered over to him.  If I had been in more of a mind to think, I would have thought it strange how tall he was – for the scarecrow stands exactly seven feet high, and this stranger was at most three inches shorter than it.

I approached him and said, “Hello.”

He only stood there, gazing deep into the stitched-up eyes of the scarecrow, and I took the opportunity to more fully study him.  As I said before, he was tall and spindly, his pant legs several inches short, while his sleeves hung almost to the knuckles of his spider-like hands.  It was his face, though, that struck me the funniest; his nose and chin were exceedingly narrow and pointed, in contrast with his large, globe-like cranium and huge dark eyes.  It was a full minute before he spoke.

“Did your father vote for the current president?” he droned.

“No,” I said, and explained that it was the Kennedy assassination that put him in office.

“Good,” he pulled a new notebook out of his pocket.  After awhile of scribbling, he looked up and gestured to the bluffs behind the house, “Limestone.”

“Who lives in your house?” he grinned.

“My parents, brother and sister, me.”

It was at that question the terror struck and I, forsaking politeness, ran full tilt away from him and into the house.  Looking out the kitchen window, I scanned the horizon for the black-garbed man, but saw only the scarecrow, pointing at nothing.

I didn’t tell anyone about him.

It was early November that the change first happened – in the empty cornfields, it was as though the land was being burnt in giant patterns of dots and spirals.  My father thought it was strange, but, since no harm was really done, didn’t inform anyone about it.

Lights began to appear in the sky over our farm, from pulsating blobs of purple iridescence to metallic, flashing things that spun and disappeared.  The house itself, too, developed a mind of its own; objects were stacked, shattered, and shifted almost everyday.  My mother referred to it as a poltergeist, and urged us not to discuss it for fear of giving it power.  On the other hand, my father, who up until then had been nothing but practical in his life, said he heard voices from outer space, friendly travelers who told him he had been chosen.  My brother and sister responded, for the most part, with silence.

Winter that year brought terror – my brother came tearing into the house one afternoon, screaming incoherently about the angel of death, the plague of Egypt.  Piecing together where he had been, my father and I walked out to the cow pasture in the new snow, unprepared for what we would see.

Every last cow was dead, their empty ribcages yawning at the sky, all their organs stolen with surgical precision.  The unnerving thing, though, stalking amid the carcasses in the fresh snow, was the complete lack of blood – from the snow, from the bodies, from anything, like something had taken it before performing its unspeakable robbery.  Things only disintegrated from there.

How can I explain a decade of hell?  Every year, the new crops were burnt in the strange radial designs, every new animal was slaughtered and bloodless weeks after its arrival.  The house was turned into a representation of madness, items constantly moving, meaningless messages scrawled across walls and tables, doors ceaselessly slamming.  One day, a window, not just the pane, but the actual window, the opening in the wall, moved over two feet.

My family, too, was shattered.  Shortly after the mutilations of the cattle my father, convinced men from Venus had chosen him as the leader of a new age, ran off with a young blonde that called herself Astraix.  I don’t know where they went.  My brother over the course of years descended into a paranoia of things he called the bright doctors that, he claimed, took him in the night.  One morning I woke with bizarre burning on my face, and that same morning, he was gone.  My mother, inconsolable with the loss of her son, and convinced that demons were to blame, made the mistake of discussing the matter with a local priest.  She was promptly sent to the institute at Mendota.

My sister and I were the only two left.  She claimed no visions, no visitations, as a matter of fact, she never spoke a word of what she thought about anything.  We lived this way, silent in the face of insanity for two years, when, without warning, she left me, one July day, to live with an uncle of ours.  Before she left, I asked her why.

“What are you waiting for?” she asked, “None of them are coming home.  We need to get out, move on.”

I felt I couldn’t leave, like a ghost that haunts its grave, and said, “But after all this time – what was it that finally got you?”

She looked out across the dead fields, and said, “I know what took the kids from the Belmont mound.”

Those were the last words she ever said to me.

It was October of that year, 1974, and I was then 25 years of age, that I wandered the empty cornfields alone.  I had half a mind to jump off the bluff, but didn’t.  I looked up at the night, burning iridescent purple, heard the doors slamming in the empty house, and then I saw it – the scarecrow, still standing, still beating at the sky.  I stood next to it, gazed in its faded face, and saw myself in it, a thing thrashing at the unseen, beaten by the unknown, and I remembered that night ten years prior, that strange, grinning man that I had refused to let in my house, and I screamed.

“You hear me you stupid thing, you tall spindly black-clothed man with crooked fingers – you devil in the cornfield, come out!  I don’t know why you did this to us, or what it is you wanted, but take it!  Come into my house!  I don’t know what else you could possibly do!”

I was momentarily blinded.  I thought maybe it was the light, coming to take me to where it took my brother, but I was mistaken – a black, unmarked car rolled through the fields.  The black clothed man got out, walked up to me, held up his wrist as though looking at a watch, and said, “What is your time cycle?”

He walked over to the house, and stopped at the open doorway.

I walked in before him, and said, “Come in.”

We sat in the living room, and he proceeded to ask me all sorts of questions – strange questions, regarding scars and names and what model of car everyone I ever knew had.  I answered to the best of my ability, as he took everything down in another new-looking notebook.  When he told me he was finished, he said, “May I take a photograph of you?”

There was a flash of light, and I woke up in my bed the next morning.

You will forgive me for saying these things happened when I was just a young man, for the truth is I am only fifteen, and it is only autumn of ’64, and I live with my parents and brother and sister twenty minutes from Platteville.  And this is where I am confused, for I fell asleep alone in ’74, and woke up to my family in ’64, and I have lived ten years that are forgotten, and have seen a future that is no more.

What I do know, is that if I ever see that thing, that man, that devil in the cornfield, he is welcome in my house, for I feel now that he did not cause the evil that came, only was prevented from preventing it.